Ian McKercher’s third novel, Carbon Copy, represents a genre switch from historical fiction to mystery, although many of the characters from The Underling (2012) and The Incrementalist (2106) have starring roles.

The novel is set in February 1942, with Canada at war against Nazi tyranny and Ottawa mired in a vicious winter.

Frances McFadden, personal secretary to Graham Towers, Governor of the Bank of Canada, is hoping to get away on a much-deserved holiday when she is summoned before a military intelligence tribunal and accused of espionage and treason.

Someone appears to be trafficking in state secrets and is willing to resort to murder to cover the trail. It’s one thing for Frances to proclaim her innocence, it’s quite another thing to prove it.

Facing a fourteen-year prison term and possibly the death penalty, Frances joins RCMP Inspector Hollingsworth and Ottawa Police Sergeant Scobie in a race through a labyrinth of dead ends, dopplegängers and deceptions to solve the deadly puzzle.

Ian Stewart McKercher was born and raised in the very civil society of London, Ontario, where murder and blackmail were considered to be impolite.

He attended Wortley Road Public School, London Junior High School and South Collegiate before taking a degree in English and History at Queen’s University in Kingston.

He moved to Ottawa in 1969 to teach English. In 1983-84 he took an eighteen-month leave to teach English in Beijing, China, where he began writing The Underling. Teaching responsibilities back in Ottawa meant he was only able to work sporadically at his writing until he retired in 2005.

The Underling was published in 2012 and popular response to the exploits of Frances McFadden at the Bank of Canada encouraged him to write a sequel, The Incrementalist, published in 2016.

Work on a third book in this series was suspended to focus on completing the mystery novel Carbon Copy.

He currently lives in the Glebe area of Ottawa with his wife, Amelia Hope.

Ian McKercher’s second novel, The Incrementalist, will not disappoint his fans. Written as a sequel to The Underling, many of the familiar characters are back.

World War II is all heady stuff for Ottawa High School of Commerce dropout Frances McFadden, who takes on the challenge with all the common sense and pluck we’ve come to know her for.

As the story progresses, the reader is struck with the haunting fear that Frances is on a path that few would willingly chose.

Also see reviews of both The Underling and The Incrementalist on GoodReads.com

Carbon Copy and The Incrementalist are available at the following locations:

My Previous Book – The Underling

The Underling is my first novel. It’s an example of old-fashioned story-telling in the tradition of Somerset Maugham. The story is plot driven and unfolds in chronological order. The characters are imperfect but likeable.

The story is set in Ottawa in the 1930s. The language and tone reflect those times.

The Underling is not based on a true story although it deals with historical characters and some real events.

The novel is now out of print. A few copies are still available direct from the Author.
eBook Formats Available 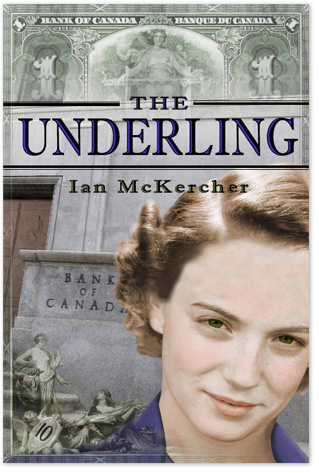